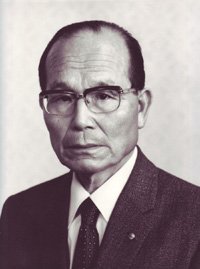 The late Professor Yasusi Tanasawa was the one of the world foremost pioneers in the research of liquid atomization. He contributed greatly to this field by ascertaining the characteristics of many different kinds of spray. One of his significant contributions was the Nukiyama-Tanasawa equation for liquid droplet distribution. In addition, he proposed many different designs for different ways of atomizing. In particular, he was noted for the swirl atomizer.

In 1982, the committee members of the council of ILASS-International proposed that future conferences should have an internatial academic award. They suggested that it should be named the Tanasawa Award in commenmoration of Professor Tanasawa’s important pioneering contributions to the field of liquid atomization and spray systems. They asked Professor Tanasawa’s disciples to put the award, including the fund raising, into practice.

The entire funding for the award was donated by the TOYOTA MOTOR Co.Ltd. This is due to the thanks of Dr.Shoichiro Toyoda, who was the former president of TOYOTA MOTORS Co. and is one of Professor Tanasawa’s disciples.

Professor Yasusi Tanasawa presented the first winner the award at the Sendai Conference by himself.

The selection committee for the Tanasawa Award has been organized to select the best paper from each previous ICLASS conference. The committee consists of nine members who are nominated from throughout the world.
The Tanasawa Award consists of the Plaque with Silver Metal, Award Certificate and Prize Award. Read more about Professor Tanasawa

“The Influence of Surfactants  on Impacting  Drops” by A. Rozhkov, B. Prunet-Foch, M. Vignes-Adler

“Study on Wave Motion and a Breakup of Annular Liquid Sheet in a Gas Stream” by H. Hashimoto, S. Kawano, H. Togari, A. lhara, T. Suzuki and T. Harada

“Application of Poisson Statistic to the Problem of Size and Volume Flux Measurement by Phase Doppler Anemometry” by C.F. Edwards and K.D. Marx

“Advances in Diagnostics for Complete Spray Characteristics” by W. D. Bachalo, A. B. DelaRosa and R. C. Rudoff

“The Mechanics of High Speed Atomization” by F. Ruiz and N. Chigier

“The Relationship between Atomization Characteristics and Spray Flame Structures” by R. Bolado and A. J. Yule